Today we share with you a post on  Chris Smit's  Culture Matters   site which articulates six solid reasons that show why what we seek to achieve in our games and many other intercultural interventions require real people rubbing elbows with each other. It is a short but powerful read.

Everything tends to move online. We buy our books online, we do our groceries online, we book our tickets ourselves and even certain forms of training have taken on the shape of e-learning. Effective for some topics; in my eyes less effective for other topics.

Of course I think that becoming culturally competent is not something you can learn from or on a machine.

I get the request, if I have some sort of e-learning or online learning on my website Culture Matters,  not that often. But every now and then a potential client does ask me.

Below are 6 reasons why intercultural management or becoming culturally competent should not be given in the form of e-learning.

“People can live with the What if they know they Why”.

Just like sales or selling (whatever it is you’re selling), dealing with people from different cultures is a “contact sport“. Your dealing with people, individuals, who, because of their face-to-face contact (and this can also be remote on different locations) are experiencing difficulties that nine out of ten can be attributed to cultural differences.

There are very little situations in human interaction identical to each other. The consequence of that is that it is virutally impossible to capture every situation in an e-learning form. The second item where e-learning falls short to real in-class training, is context. Often, when the context changes, the situation changes as well and the way you competently deal with another culture changes as well. 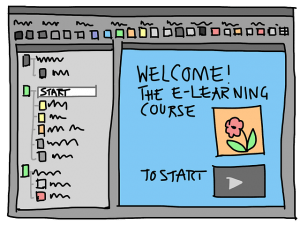 People are not monkeys who you should learn a couple of tricks (mostly do’s and dont’s) and then they’re good to go and be culturally competent. No. People often want and need to know why something is what it is.

It’s along the lines of “People can live with the What if they know they Why”.

For me, cultural competence training is a face-to-face activity. A people thing. Think about it this way: How well would you be able to swim if you only read a book about swimming? Not a lot. You might know the moves theoretically. But as soon as you get in the water, things change complete.

Another example would to read about the taste of strawberries without ever tasting one. That simply doesn’t make sense.

The last point I want to make here is that the concept of e-learning is often done individually. While, when you’re in a classroom setting, one will benefit from the interaction, group dynamics, and the knowledge that other people will bring to the table.

I hope I’ve been able to convince you that cultural competency training is best done in real time with and between real people. Not through a machine.